The module can be used to explore the effects of green infrastructure initiatives on the urban heat island from the neighbourhood to city scale (for example, the LST response for a precinct if a 10% increase in tree canopy cover were to occur). The module can also be used to compare different urban development scenarios and their impact on the surrounding microclimate.

The module works through the use of a ‘microclimate grid’ for the given study area, which summarises the land cover data encompassed by each grid cell and grants a mean temperature for the cell area.

The land cover data can be derived from two sources: a land classification raster, which can be created from satellite imagery using GIS software and denotes the land cover of an area on a pixel-by-pixel basis; and the Scenario Tool’s urban development model, which generates residential lots, trees and local streets for specified regions.

Both sources can be used as input for the land surface temperature model. The land classification raster, if used, acts as a base layer for the area of interest (for a guide to preparing a land classification raster, see here). If infrastructure was engendered from the urban development capabilities of the tool, the land cover information from the raster is overridden for these areas.

Once the urban development modelling is complete and a performance assessment is run, a microclimate grid is generated. The grid covers the entirety of the region being considered, and its cells are assigned the proportion of the different land covers contained within them, using the pixels from the input raster and the area of the urban form features to calculate the fractions (infrastructure created by the Scenario Tool is allocated a relevant land cover type, e.g. roof land cover for a building footprint).

With the proportions of land cover in tow, a mean LST for each grid cell is able to be established using a weighted average of the temperature figures attributed to each land cover.

The LST figures are stored as attribute values in the microclimate grid layer of the Scenario Tool simulation database. These values can be harnessed to produce the outputs that are published within the tool’s main dashboard. Average surface temperature is calculated for each scenario modelled, and the distribution of every scenario’s surface temperature values is charted in a cumulative distribution graph. The model’s results can also be visualised spatially, with the dashboard’s satellite imagery being able to be overlaid with a realisation of the microclimate grid that utilises a colour graduation to denote the temperature of the individual cells. Additionally, the temperature variation between the same cells of different scenario grids can be seen as part of the satellite image overlay with the use of the comparison feature. 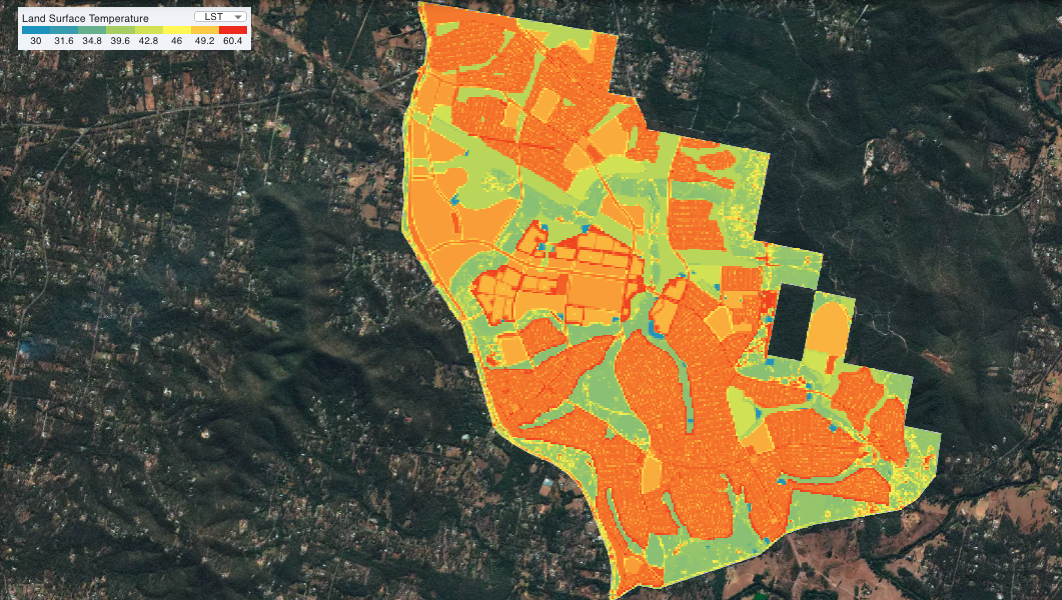